Orville Schell is the Arthur Ross Director of the Center on U.S.-China Relations at Asia Society in New York. He is a former professor and Dean at the University of California, Berkeley’s Graduate School of Journalism. Schell was born in New York City, graduated Magna Cum Laude from Harvard University in Far Eastern History, was an exchange student at National Taiwan University in the 1960s, and earned a Ph.D. (Abd) at University of California, Berkeley in Chinese History. He worked for the Ford Foundation in Indonesia, covered the war in Indochina as a journalist, and has traveled widely in China since the mid-70s.

Schell is the author of fifteen books, ten of them about China, and a contributor to numerous edited volumes. His most recent books are: Wealth and Power, China’s long March to the 21st Century; Virtual Tibet; The China Reader: The Reform Years; and Mandate of Heaven: The Legacy of Tiananmen Square and the Next Generation of China’s Leaders. He has written widely for many magazine and newspapers, including The?Atlantic Monthly,?The New Yorker,?Time,?The?New Republic,?Harpers,?The Nation,?The New York Review of Books,?Wired,?Foreign Affairs,?the?China Quarterly, and the?New York Times, the?Washington Post?and the?Los Angeles Times.

He is a Fellow at the Weatherhead East Asian Institute at Columbia University, a Senior Fellow at the Annenberg School of munications at USC and a member of the Council on Foreign Relations. Schell is also the recipient of many prizes and fellowships, including a Guggenheim Fellowship, the Overseas Press Club Award, and the Harvard-Stanford Shorenstein Prize in Asian Journalism.

Pre-order Wealth and Power, out from Random House July 16 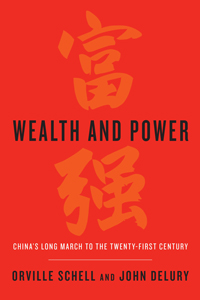 “Wealth and Power offers everything readers might expect from its two eminent authors. It is both sweeping and specific, authoritative and lively, sympathetic and critical, offering the perspective of both the hedgehog and the fox.”
—James Fallows, national correspondent, The Atlantic

“Orville Schell and John Delury have delivered a brilliantly original and essential book: the road map to China’s quest for national salvation... Vivid, literate, and brimming with insights, Wealth and Power deserves to bee a classic.”
—Evan Osnos, China correspondent, The New Yorker